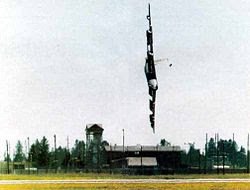 Thirteen years ago this month, an Air Force B-52 crashed while rehearsing for an air show at Fairchild AFB, near Spokane, Washington. All four crew members aboard the aircraft were killed when the bomber banked too steeply at low altitude and stalled. A photographer standing on the flightline captured the last, desperate moments of the aircraft and its crew. 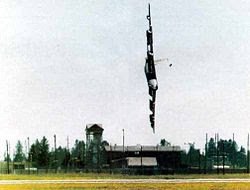 The ill-fated B-52, seconds before the crash. The small object just above the aircraft is the co-pilot’s ejection hatch. Unfortunately, the seat failed to clear the jet before impact and he was killed, along with the other crew members

The Fairchild crash was a tragedy on many levels. Not only did it claim the life of four experienced crew members, it came at a particularly bad moment for the base and the wider community. Four days earlier, a Fairchild airman, about to be discharged for a severe psychiatric disorder, went on a rampage at the base hospital, killing five people before being fatally wounded by a responding security policeman.

A detailed investigation of the B-52 crash only compounded the anguish. Investigators learned that the mishap could have been easily prevented, had leadership of Fairchild’s 92nd Bomb Wing disciplined the pilot at the controls of the doomed jet, Lt Col Arthur “Bud” Holland. A review of Holland’s high-profile missions at Fairchild revealed a long history of disregarding safety and technical order data, which set maneuvering limitations for all types of aircraft, including the eight-engine heavy bomber.

Much has been written about the Fairchild crash, most the detailed study prepared by then-Air Force Major Tony Kern. His “Darker Shades of Blue: A Case Study of Failed Leadership“ published by Neil Krey’s CRM (Cockpit Resource Management) Developers, remains the definitive account of the organizational complacency and complete lack of accountability that led to the disaster at Fairchild.

Kern’s study paints a picture of a supremely-confident aviator (Lt Col Holland), whose obvious skills as a “stick and rudder” pilot obliterated his judgment as an airman. On at least six separate occasions before the fatal crash [emphasis added], Holland flew his B-52 at altitudes, bank and pitch angles that were in clear violation of Air Force regulations. During one of those episodes, his bomber barely cleared a ridgeline at a bombing range, where a DoD-authorized crew was filming.

Another B-52 piloted by Lt Col Holland barely clears a ridgeline at the Yakima, Washington bombing range in March 1992. Fearing for their safety, the film crew ceased operations and took cover. On a subsequent pass, Holland reportedly cleared the ridge by only three feet, grossly violating safety “minimums” for altitude and clearance (H/T: Wikipedia).

On another occasion–the 1993 Fairchild base airshow—Lt Col Holland flew a profile that clearly exceeded safety and technical order data. At one point, according to a crew member observing from the ground, Holland put his “Buff” into a near-vertical, pitch-up maneuver, putting the bomber dangerously close to stalling and crashing.

As Kern reminds us, the chain of complicity didn’t end with the rogue pilot. At air shows, change-of-command ceremonies and similar events, he executed illegal maneuvers in front of senior officers, but was never formally sanctioned for his conduct. Holland served under at least four different wing commanders during his time at Fairchild, and under multiple Operations Group commanders. Kern–who based his examination on the transcripts and files of Air Force investigators–found no record of any senior leader (at the O-6 or flag level) attempting to discipline Holland, or ground him from flying.

And the rush toward disaster continued. In planning sessions for the 1994 air show, Lt Col Holland briefed profiles that were outside prescribed limits. The Wing Commander corrected him, but when Holland performed out-of-limits turns and pitch-up during an initial practice session–in clear defiance of the wing commander’s directive–nothing happened. Holland remained as aircraft commander, and the ill-fated bomber, callsign Czar 52, took off for its final practice mission on the morning of June 24, 1994.

The man in the right seat that day was another highly-experienced B-52 pilot, Lt Col Mark McGeehan. In the investigation that followed, Lt Col McGeehan emerged as one of the few heroes of the tragic saga. As commander of the 325th Bombardment Squadron at Fairchild (the B-52 unit), McGeehan listened to complaints about Holland’s unsafe practices from his pilots and navigators. Lt Col McGeehan elevated those concerns to his superiors, who failed to act.

McGeehan also decided that he would not endanger the lives of his younger crew members by putting them in a Buff with Holland at the controls. Instead, Lt Col McGeehan and his operations officer, Lt Col Ken Huston, penciled themselves onto the schedule as Holland’s crew. They were joined by the Wing Vice-Commander, Colonel Robert Wolff, who was added as a safety observer. Czar 52 crashed as the pilot–undoubtedly Holland–tried to execute an extremely tight turn around the base control tower at low altitude.

More than a decade later, we believe the Fairchild tragedy still offers important lessons for the intelligence community. Many of the traits evident in the 92nd Bomb Wing–complacency, a lack of accountability, and a refusal to follow existing regulations–are evident within intelligence organizations.

Consider the “leak culture” that proliferates within the community. As we’ve noted in the past, there have been over 500 deliberate disclosures of classified information since 1995–and not a single, successful prosecution. Earlier this year, the FBI complained that intelligence agencies remain uncooperative in the effort to ferret out leakers.

That speaks volumes about a profession that has become increasingly politicized, populated by an active minority that is willing to advance its own aims, with little regard for potential consequences. An assessment of the afore-mentioned leaks concluded that the disclosures have, collectively, caused serious damage to our national security, yet the incestuous relationship between leakers and the press continues to flourish.

As for accountability, we are still stunned that not a single, senior intelligence official lost his or her job because of the failures surrounding 9-11 and the Iraq WMD issue. That sends a clear message to senior leaders–as well as the rank-and-file–that it’s okay to make the same mistakes, over and over again. With minimal standards of accountability, it’s little wonder that the hide-bound intelligence bureaucracy refuses to change and adapt.
We can only imagine the “first impressions” of the thousands of new analysts who have joined the community over the past six years. Sadly, many of them will become frustrated by the problems that continue to plague our intel organizations and move on to greener pastures, leaving the next generation of politicians and bureaucrats to perpetuate the status quo. Despite Congressional investigations and the work of two “blue ribbon” commissions, the culture that helped produce massive intelligence failures in the recent past just keeps puttering along.
Ironically, the Air Force–or at least, the service’s pilots and aircrew members–seem to have learned from the Fairchild tragedy. The crash of Czar 52 remains one of the most-studied and analyzed mishaps in aviation history. Kern’s analysis forms the foundation of a case study taught at the Air War College, and the incident is widely used by civilian and military aviation instructors in training new pilots and crew members.
By comparison, we remain unconvinced that the intelligence community has internalized the “hard lessons” of its recent failures. Comparing conditions across a vast bureaucracy to the factors behind a single B-52 crash may represent an inexact analogy, but (from our perspective), many of the cultural trends observed in the 92nd Bomb Wing in 1994 are also evident within today’s intelligence community.
Like that Air Force bomb unit, the intelligence profession has paid dearly for its complacency, its disregard for protecting nation’s secrets, and its refusal to hold members accountable. These problems have festered under successive administrations (Democrat and Republican), and under a parade of senior officials that are supposedly our “best and brightest.” As with the leadership of the 92nd Bomb Wing in 1999, our intelligence leaders are either oblivious to the problem, or (perhaps more accurately), they find the culture resistant to change, and simply give up after an initial flurry of effort. Whatever the reason, these conditions still persist in our intelligence agencies, and the potential cost of these problems may be measured in thousands of dead Americans, not the loss of a single bomber and four crew members.