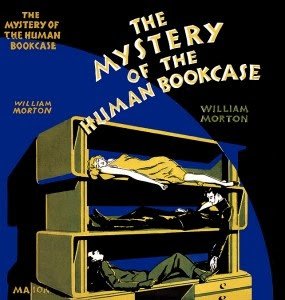 Without going into the arguments about detective stories being a peculiarly conservative genre, I should just like to quote something I found in a novel by William Morton alias William Blair Morton Ferguson, a man of may talents. In fact, if ever I am called upon to name a true denizen of Grub Street, it would be him, and that is a form of praise, ladies and gentlemen. Here are his achievements in the film industry and here is a partial list of his novels.

The novel I have in mind is The Mystery of the Human Bookcase and it is not, pace its title, a horror story in the Poe mould but a very straightforward detective yarn with two excellent characters: Kirker Cameron, New York Commissioner of Police who, unusually, is not there for political reasons but because he is good at his job, having been trained at the Paris Sûreté and worked with Scotland Yard and Jerome Bland, the District Attorney who is not as smart or imaginative as Cameron but is completely honest and contemptuous of politics.

Anyway, they have found the body and discovered that it was, apparently, that of a well-known thriller writer, despised by Mr Bland and rather liked by Mr Cameron, who gives the following explanation:

Man was so made that he must torment himself with mysteries and enigmas and thus the detective story always had been popular. It was the most ancient form of self-torment, and, as Bland might remember, the first three ever written could be found in the Aeneid, Herodotus and the Jewish Apocrypha.

This novel was first published in 1931 but one cannot help wondering whether the author had seen Dorothy L. Sayers’s introduction to the first volume of Great Short Stories of Detection, Mystery and Horror. It starts with the words:

The art of self-tormenting is an ancient one, with a long and honourable tradition. Man, not satisfied with the mental confusion and unhappiness to be derived from contemplating the cruelties of life and the riddle of the universe, delights to occupy his leisure moments with puzzles and bugaboos.

In the next paragraph she says:

Both the detective-story proper and the pure tale of horror are very ancient in origin. All native folk-lore has its ghost tales, while the first four detective stories in this book hail respectively from the Jewish Aporcypha, Herodotus, and the Aeneid.