Was French revolution A Bourgeoisie Revolution? 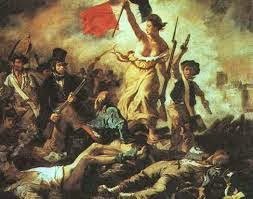 An important debate that has dominated the thinking of the French Revolution is the question of whether it was a Bourgeoisie Revolution or not. The classical interpretation of the revolution from the time of Michelet to prominent 20th century Marxist historians like George Lefebvre and Albert Soboul have viewed the French Revolution in terms of a class struggle between the Bourgeoisie and the landowning nobility, which led to the transition from feudalism to capitalism. The revisionist historians like Alfred Cobban and George Rude argue that this class based interpretation is obsolete.

One final aspect left to be discussed is regarding the constitution of the new ruling class  in France. Soboul argues that those sections of the bourgeoisie, which had derived their wealth from seigniorial dues, revenues of venal offices and rents were adversely affected and they were replaced by a new bourgeoisie dominated by the heads of commerce and industry. Cobban, however, argues  that while the bourgeoisie may have lost as owners of seigniorial dues they gained as owners of land. He rejects Soboul’s views that venal officers were ruined as a large number of them were part of the assembly that carried out the abolition. The abolition was meant to be compensated through judicial and administrative positions. As far as the prosperous commercial and financial bourgeoisie is concerned Cobban categorically states that the revolution was neither led by them nor was it in their interests. Businessmen received perhaps even less recognition than before the revolution. According to Reinhard, the new ruling elite was one of soldiers and bureaucrats. Moreover, Napoleon preferred a peasant and agricultural society and the idea of a capitalist economy was completely alien to him. Thus, JM Roberts concludes that France continued to be dominated by ‘notables’, whose wealth and influence was based on land. Thus, in effect, the new ruling class of France was above all one of landowners.