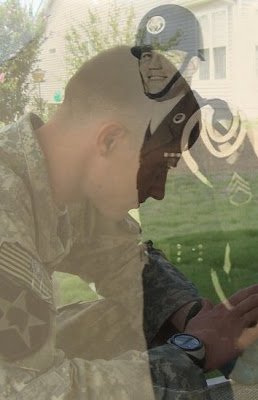 Isn’t this a great image for Veterans Day?

A very close childhood friend, Kim Rounseville Herrington, shared this image with me and many of her friends. My writer’s itch took hold when she advised the men in the picture were her father and son.

Grandfather and grandson never knew each other but years apart they both answered their country’s call and served proudly. The image seen here is one of Kim’s most favorite images of her father. It was the last picture taken of him blended with a picture of her son Timothy the day he came home from his first tour in Iraq. My friend received the picture as a gift from her daughter-in-law.

Kim tells me her father, Joseph W. Rounseville , was involved in the Tet Offensive in 1968 after enlisting in the Army at the age of 17. Unfortunately, he gave the ultimate sacrifice and was killed in action having attained the rank of First Sergeant in February, 1968. He was a “Master Blaster” in the Rangers, Airborne with the 82nd Division in Ft. Campbell, KY.

Kim advised me her father’s awards are too numerous for her to list, but in her possession she has a Bronze Star with four Oak Leaf Clusters (9th highest award given), Silver Star (third highest given), and one of his Purple Hearts and one of his Vietnam service medals.

In the last few years Kim has been able to make contact with her father’s relatives and has learned so much about him. She advises me he was a class act and many of the letters she has received from men that were under his command said he led by example, not by word. He was the one in FRONT of them to show the way, not behind them.

Kim son, Timothy Herrington is currently a Staff Sergeant in the Army with over five years of service.

Happy Veterans Day to all of those who have served……to all of those currently serving their county and our most reverent remembrance for our fallen heroes.