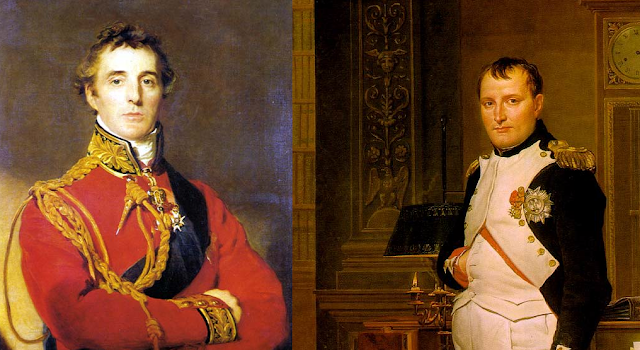 It is Waterloo year, the first that can be fully celebrated since the year itself as 1915 was hardly a time for celebrations. Tory Historian has been doing various things: going to the National Portrait Gallery exhibition about the great Duke, watching a poor play performed with great zest in a Regency toy theatre in the British Museum where there is an exhibition about propaganda for and against Bonaparte and, as of yesterday, re-reading Andrew Roberts’s wonderfully well written Napoleon and Wellington.

Mr Roberts has more recently written an admiring biography of the Emperor but he is also something of an admirer of the Duke. The people he has little time for are the Whigs and this is what he has to say about them:

The exaggerated loathing of the Whigs for the man who threatened and finally defeated their idol Napoleon was to be a constant feature throughout Wellington’s career. They emerge from their story not as witty, brilliant, big-hearted Olympians of politico-social mythology, but as quotidian, nit-picking, mean-minded quasi-traitors.

Tory Historian has had a number of heated discussions with people who appear to believe seriously that the Whigs were somehow more democratic and more concerned with the fate of the common people than the Tories. They were mostly concerned with power that they wanted to and often did see in their own hands. Their attitude to the French Revolution once the heady early days gave way to state terror and oppression is extraordinary by any standard and their attitude to France once it became Britain’s clear enemy verges on bizarre or, as Mr Roberts, treacherous.