The Strength of the Triangle 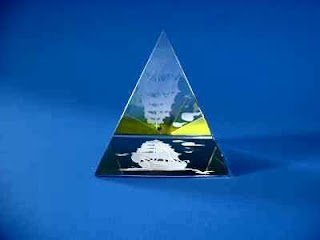 The Strength of the Triangle

We have a few wooden geometric shapes for students to use as math manipulatives including three dimensional globes, triangles, squares, and rectangles. As one of the Social Studies teachers for my team I don’t usually have any need for these figures, however, recently I’ve been accumulating and hoarding the wooden triangles.

Yes, if it’s March, then it’s time to seek and gather triangles while ye may.

The other day students entered the room to find several wooden triangles strewn about on the desktops as well as pictures of triangles taped to the board and one on the computer that projects up to the wall mounted television.

“Hey, Elementaryhistoryteacher, are we gonna do math?” asked one of my fiesty, loud, outspoken boys.

Another young man responded, “Nah, remember Elementaryhistoryteacher told us at the beginning of the year she don’t do math.”

A tall girl that I can always depend on to “remind” everyone about what they should be doing said, “I bet we’re going to do some art. Elementaryhistoryteacher, are we going to draw triangles?”

Little Girl Who Always Does Things Her Own Way immediately rushed over to the crayon drawer (this is the end of March….the 25 individual crayon boxes were torn up or disappeared by Thanksgiving….actually I’m blessed that I still have any crayons at all). She pulled the drawer out and placed it on the front table while Roll-On-the-Floor-Boy raced Falls-Asleep-All-the-Time-Girl to the closet screaming, “I’ve got the paper!”

I remained sitting behind my desk determined to ignore the proceedings as long as I possibly could simply wondering how far they would go.

Two of my Smarty Pants Go-Getters approached me and stood before my Den of Solitude very reverently. I finally looked up.

“Um, Um, Um, are we…are we gonna do something with pyramids?” asked Smarty-Pants One.

Smarty Pants Two said, “Oh, if we are going to start something on Egypt I have some models of the Great Pyramids. Can I bring them in?”

That got some others started……

“Did you know that they buried people in those pyramids?”

“Isn’t that where Joseph was?”

“Hey! Hey! Hey, this glass pyramid here…..is this a greenhouse? My grandmother has one of those. She won’t let us play baseball anywhere near it. I don’t know why. There just a bunch of plants in there.”

“Ewww, the greenhouse effect. Miss Science taught us all about that.”

Actually is was only about eight minutes, but when you are dealing with chattering loverlies eight minutes can seem like eons of time.

I sat and then I sat some more. Finally they noticed me sitting and calmly the drawing paper was put away, the crayon box restored to its nest and all hind-ends met up with plastic seats.

I made an inquiry with one word, “Paper?” Instantly (well, almost) everyone had a piece of notebook paper. I asked students to work with their study partner and look at the pictures of the triangles I placed on the board and on the television. I asked them to pick up a three-dimensional triangle from the table top and really examine it and think about the structure of a triangle. After a few minutes I asked, “What makes a triangle a triangle? Talk it over with your partner and make a list.”

After a few minutes I said, “When some of you were talking earlier many of you mentioned Egypt. Look at your list and discuss with your partner why you think the Egyptians used pyramids the way they did.”

Another few minutes went by and I went back to my stool. The kids have learned this is my silent signal that we are ready to begin, or I require their attention. I announced that I wanted the whole group to share about what they had been discussing with their partner. They a

ll had discussed the general attributes of a triangle…..three sides, pointy ends, flat sides, etc. A few said some triangles are three-dimensional and others are flat images. Some volunteered the Egyptians used the triangle because it was an interesting shape and got the attention of people out in the desert. Some students mentioned it might have been the easiest structure for the Egyptians to make based on the environment and the natural resources available. One duo thought that the use of the triangle indicated the people were reaching up to Heaven, and the triangle is the best shape to reach upward.

“Let’s talk about the simple construction of a triangle,” I said as I walked over to stand next to a triangle I had drawn on the board. I indicated one side of the triangle with my hand and asked, “Do you see how I could say that this side of the triangle is pressing on the other two?” Some heads nodded yes, but others weren’t with me yet. I picked up a paper strip triangle I had made by fastening the side strips together with brads so that the sides moved this way and that. I held up the paper strips and students saw a perfect triangle. I said, “Now watch what happens when I apply a little pressure on one side against the other two.” Instantly the paper triangle collapsed. “Now, this shape is made from flimsy paper. Think for a moment about our stone pyramid you see in the picture on the television. “Do you understand now how all sides and edges push against the other two? Pick up the three-dimensional triangle you have in front of you and discuss it.”

In a few minutes I sat on my stool and things quietened down. I asked, “So, what did you decide?” Students figured out that perhaps the Egyptians used the triangle because it can be a very strong figure. When students brought up the fact that pyramids are larger at the bottom than the top I asked, “Where do you think all the weight is?” The top, of course, was the reply I received. I advised that since less weight is on the top and since the top presses down it has less weight and all three sides can support each other.

“Sometimes we use a triangle diagram or graphic organizer to explain things we want to create an image for. What are some reasons why we do this? Think about what we have already discussed. What kinds of things would we want to illustrate by using a triangle graphic 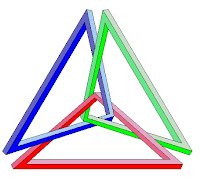 Students advised triangle diagrams would work when there were three parts to whatever was being illustrated. Other students advised that the connection between the three things being illustrated would have to be strongly linked, and they decided that the items would need to be things that could be equal or as one student remarked, “Each thing can’t have more power than the other or the triangle won’t be a triangle anymore.”

“Yeah,” someone else remarked. “You’ll just have a mess.”

I gave a big “Hmmmmmm, close your eyes everyone and imagine a collapsed triangle…a collapsed pyramid. Look over the big mess. Now, open your eyes and discuss how the big mess is like the results of the Articles of Confederation. How are the two alike?

Students remembered that the Articles allowed for unequal power between the Federal government and the states. The states had more power.

One young lady said, “Well, I know why it didn’t work and why the triangle collapsed.”

She got up and walked to the front of the room and put her hands around one of the flat triangles I had drawn on the board. The Articles of Confederation just had the Federal government and the states. That’s two not three. It was an incomplete triangle. No wonder it failed.”

Heads nodded around the room in agreement. Another student said, “Yeah, we need three things to make the government work.”
From this point I asked students to draw a triangle on their paper and began sharing the three branches of the United States government with them and launched into a discussion of how the process of checks and balances work. I drew a circle at each of the three points and labeled one point executive, another legislative, and the third judicial. The checks and balances between each branch was written along the sides of the triangle.

Later the crayons were pulled back out as students color coded their diagrams.