The Russian Revolution of 1917 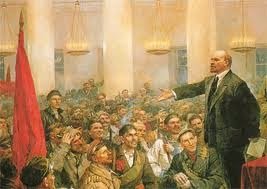 Russia had witnessed a revolution in 1917, which for the first time witnessed the establishment of the dictatorship of the proletariat. This revolution was accomplished in two stages: the first stage was the ‘February Revolution’, which saw the overthrow of the Tsarist Autocracy and the second was the ‘Great’ October Revolution of 1917 which brought the Bolsheviks to power under V.I. Lenin. In addition to these revolutions, the Revolution of 1905 is extremely important in the understanding of the 1917 revolution as it acted as a ‘stepping stone’ for the events of 1917.

Thus, to conclude, one can see that the Bolshevik Revolution was not an aberration in the history of Russia nor did it develop overnight. All was not well within the Russia Empire for a long time and it was a combination of war-weariness, political oppression, economic hardships in the countryside and urban towns and a number of other factors had brought about the overthrow of the Autocratic Tsarist regime. However, it was the disillusion with the dual system of governance and the parties associated with it created a favourable environment for the Bolsheviks to exploit, who adopted its policies to correspond with the popular demands. It was with their seizure of power that a new era had started in the history of Russia and the world.