The First World War from another point of view 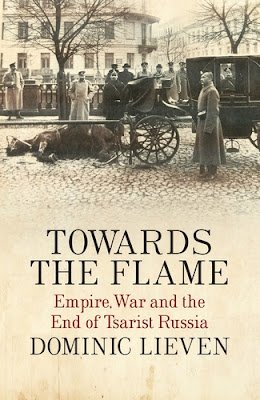 As last year’s overwhelming and not always accurate memorials to the outbreak of the First World War slide away into memory, we can start discussing the subject a little more seriously and look at the conflict as well as its aftermath, the Versailles order, from other points of view. In January after watching Testament of Youth, I wrote a dissatisfied posting. I had hoped that the centenary would bring out more than just more stuff about the Western front, the mud, the barbed wire, the sensitive young men hardened by the horrors, etc etc. The film, as I said, was very much in that group and not a particularly good example of it, either. As it happens, the film did not garner particularly good reviews and disappeared from the cinema screens surprisingly quickly. Had everyone had enough of the whole subject by the beginning of this year? Or was the film simply not appealing enough?

There were, of course, a number of serious historical works published as well and, maybe, I should do a blog about some of them but the one that came out recently is of superlative interest to anyone who really wants to know about the causes of the war, its development and its aftermath.

The book is called Towards the Flame and subtitled Empire, War and the End of Tsarist Russia and is by the eminent historian, Professor Dominic Lieven (yes, he is of that family though not, I believe, a direct descendant of the Russian Ambassador of the early nineteenth century).

Professor Lieven chastises his colleagues, historians in the English-speaking world for concentrating too much on the Western European aspect of the war. In his Introduction he says:

This underlines a basic point about the First World War: contrary to the near-universal assumption in the English-speaking world, the war was first and foremost an eastern European conflict. Its immediate origins lat in the murder of the Austrian heir at Sarajevo in southeastern Europe. The assassination of Franz Ferdinand on June 28, 1914, led to a confrontation between Austria and Russia, eastern Europe’s two great empires. France and Britain were drawn into what started as a conflict in eastern Europe above all because of fears for their own security: the victory of the Austro-German alliance over Russia would tilt the European balance of power decisively towards Berlin and Vienna.

The question before 1914 was who would be the dominant power in Central and Eastern Europe: Germany and Russia, with Austria-Hungary (as it was by then) naturally inclining to support Germany.

Germany, says Professor Lieven, did not really have to win in the West: a draw would have been sufficient as long as Russia was defeated, something that was confidently predicted by 1916. In the end, Russia’s defeat did not help Germany as the war in the West ended with the Allies’ victory, thanks to the American entry into the war and those Eastern gains had to be surrendered.

I must admit this all seems fairly obvious to me but, perhaps, not to a number of better known historians. (Much better known.)

The Versailles order, set up in the wake of the victory in the West could be put together only because the situation in the East was rather peculiar. A war that started as a bitter to-the-death contest between Russia and Germany ended with both countries defeated and destroyed. It was, therefore, possible to dismember the Austro-Hungarian Empire and set up a number of small states that could not defend themselves against a strong and aggressive Germany or Russia (or, perhaps, both as it happened in 1939 in Poland and the Baltic states). The assumption that this state of affairs could go on indefinitely was rather strange. Sooner or later and probably sooner rather than later Germany and/or Russia would become strong again and there would be another catastrophe for Europe. So it turned out. The Versailles order that had excluded both Germany and Russia was inherently unstable.