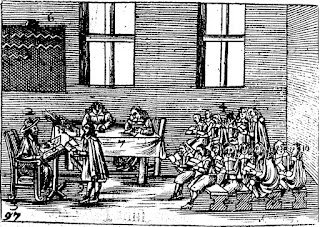 Historians have, for obvious reasons, concentrated on the military aspects of the English Civil Wars, yet there can be no doubt that the civilian population was affected, some very dramatically. This blog sets out some of the ways in which schools and schoolmasters suffered as a way of illustrating some of the effects of the civil wars on daily life in England.
There is an inherent difficulty in establishing what happened to the schools, however, partly because so many have no records covering the period. Yet many grammar schools were run by governors who ordinarily took care to keep written records and therefore this gap is an indication of the severity of the upheavals of the period. Fortunately some records survive while a few individual school histories provide specific information.
Where records are available, they show that the effects of the wars varied from the mundane to the catastrophic. At one extreme, twelve months after the start of the wars, the master of Shrewsbury school commented that the completion of the annual audit was marked by a dinner instead of the customary banquet (Fisher, 1899, p147). Presumably money was tight.
That was a recurring problem in the period although in most places it meant rather more than merely having to forgo a banquet. The majority of seventeenth century schools in England relied on rental income from land that had been donated. The difficulty for some was that the land was too far away to allow the safe collection of rents when soldiers were moving around the country.
Hawkshead school in the Lake District is a prime example: it owned land in Wakefield and Doncaster but was unable to collect the rents with armies on the move (Hawkshead grammar school website n.d.). At St Paul’s school in London, the funds to pay for pupils to go to university were suspended, as McDonnell puts it, ‘a reason being no doubt to be found in the difficulty of collecting tithe during the Civil War in so distant a county as Northumberland’ (McDonnell, 1909, p202).
But distance was not the only reason that rents were sometimes uncollectable. During the period of the wars, people’s possessions were taken by soldiers: there were cases of smallholders having their horses taken and sometimes even the tools they used to cultivate the land. In the case of The Perse School, their tenants were taxed so heavily that they ‘professed themselves unable to pay their rents’ (Gray, 1921, p47).
The account books for 1645 at Ashby-de-la-Zouch grammar school do not provide an explanation for the school’s inability to collect rents from 10 of the tenants but the problem caused a shortfall of close to 20% of the school’s annual income (Fox, 1967, p159 and 161).
Events at Wakefield had even more far-reaching consequences. The school records for February 1653 maintain that soldiers broke into a room containing two strong boxes that were used to store the deeds of property owned by the school and forced the locks on the boxes. The deeds were scattered around the room and some were said to be missing. The suggestion is that the soldiers sold some of the deeds to some of the tenants, enabling the tenants to claim that they were freeholders and therefore not liable to pay rent. It is impossible to prove the allegation but certainly later records show that a number of tenants refused to pay rent between 1649 and 1652 (Peacock, 1892, pp90-95).
Financial difficulties were not confined to rent arrears: Vincent maintains that schools were expected to make donations to whichever army happened to be in the area. Crewkerne is reported to have paid money to Parliament in 1643, to the King in 1644 and then Parliament again in 1645 (Vincent, 1950, p43). Inevitably, the shortage of money affected the schoolmasters. William Burt, schoolmaster in Thame, had to mortgage his goods in order to survive while the master and usher of The Perse had their salaries halved for the duration of the wars. The master at Rugby was so short of money by 1651 that he was driven to burn wooden parts of the school and its furniture in order to keep warm (Vincent, 1950, p40). At least he was able to remain in the school unlike the master of St Peter’s School in York, which was destroyed, as was the grammar school in Ashby-de-la-Zouch (Fox, 1967, p43 and 49).
A shortage of cash was not the only difficulty facing schoolmasters. Those who backed the wrong side stood to lose everything. Thomas Chaloner, master of Shrewsbury school was a well-known Royalist. Once Shrewsbury fell to Parliament, Chaloner was ‘ejected from his mastership and plundered of all that he possessed’ (Fisher, 1899, p153). According to Wroe et al, when the civil war broke out, Rotherham was a Parliamentarian town but the master of Rotherham Grammar School was a Royalist. He decided to retire and became rector of Great Ponton in Lincolnshire but in 1646 he suffered sequestration and moved to London where he taught in private schools. After the Restoration, he was installed as Rector of Stock in Essex (Wroe et al, 1934, p13).
Thomas Hall, master of King’s Norton grammar school and rector of the local church was a parliamentarian but he was caught between parliamentarian Birmingham and royalist Worcester. He was clearly on the wrong side when the monarchy was restored so he opted to leave both his mastership and his living (Vaughan, 1963, p24). William Spicer was a son of a Royalist parson and was 24 when he was appointed master at Bromsgrove grammar school (Icely, 1953, p15). Icely concluded that Spicer was removed as master of the school when Parliament prevailed but he would not have been alone. During the Commonwealth period until the Restoration in 1660, many Royalists were removed from schoolmaster and clergy roles.

From 1660 onwards, the tide turned in the opposite direction: now it was Parliamentarian sympathisers who were ejected. Between the terrible effects of the wars themselves and the appalling consequences, both under the Commonwealth and after the Restoration, there can have been few schoolmasters who remained unaffected. Whether it was shortage of money or the result of backing the wrong side, the period from 1642 to 1660 was not a good one in which to be a schoolmaster.