The Disease of Washington D.C. 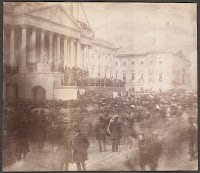 The Disease of Washington D.C.

Way back in June, 2007 I visited Mississippi and toured the home of James A. Quitman of “Halls of Montezuma” fame. Pictures from Quitman’s home, Monmouth, can be seen here while you can learn more about Quitman’s service to his county here. While I don’t agree with many of Quitman’s views I found it tragic that his service to his country ended earlier than it should. In my post I wrote:

Quitman’s work came to an end tragically after attending a dinner for James Buchanan. Poison was suspected after several men fell ill. Quitman lingered for sometime, but eventually died from what some state was National Hotel Disease. What’s that? Ah, another story for another time.
Perhaps now that both political parties have had their convention and running mates have been secured it is time to tell the story and revisit the climate of Washington D.C. in the past and in the present…..

In her book titled Reveille in Washington 1860-1865, Margaret Leech sets the stage on the eve of Buchanan’s inauguration which was held on March 4, 1857. She states:

….the city of Washington was a southern town, without the picturesqueness, but with the indolence, the disorder and the want of sanitation…Fish and oyster peddlers cried their wares and tooted their horns on the corners. Flocks of geese waddled on [Pennsylvania] Avenue, and hogs, of every size and color, roamed at large, making their muddy wallows on Capitol Hill…People emptied their slops and refuse in the gutters, and threw dead domestic animals in the canal. Most of the population still depended on the questionable water supply afforded by the wells and by the springs in the hills behind the city. Privies, in the absence of adequate sewage disposal, were plentiful in yards and dirty alleys….
Andrew Dickson White, a U.S. Diplomat, author, educator, and co-founder of Cornell University wrote in 1896 of our nation’s capitol:

The general impression made upon me at Washington was discouraging. It drove out from my mind the last lingering desire to take any part in politics. The whole life there was repulsive to me, and when I reflected that a stay of a few years in that forlorn, decaying, reeking city was the goal of political ambition, the whole thing seemed to me utterly worthless.
I visited Washington D.C. in May of this year, and while I did not find the physical city of Washington in the dire straights Leech relates, the aura of the town reeked of the sticky mud found at the spot which serves as middle ground for the give and take of a tug-of-war. It was so thick in the air you could cut the tension with a knife.

I can certainly agreee with Mr. White.

Why in the hell would anyone want to get into the political pool?

But, before I go down that road of why we should volunteer to run for political office I want to visit the National Hotel part of the story…….

The National Hotel sat at the corner of Pennsylvania Avenue and 6th Street. It was one of the city’s largest hotels. During the 1830s and 1840s, the hotel was known as Gadsby’s. For some reason by the 1850s it was the meet and greet place popular with Southerners who flocked to Washington to take place in the slavery debate during the 1850s…perhaps they served a mean bowl of grits…….I’m not sure.

Think back over the last two weeks and how the presidential nominees arrived at the convention hall a bit early to be on hand following the acceptance speech of their vice presidential nominees. When James Buchanan was nominated by the Democrats for the 1856 election he wasn’t even in the county……this actually made him attractive in that he had not sullied his hands with the struggle during the Kansas-Nebraska debate. Buchanan was in England when he was nominated on the 17th ballot. He didn’t want to run, but accepted the nomination as his cross to bear.

Buchanan won the election over the first Republican candidate for president, John C. Fremont. Though Buchanan was not born a Southerner he was as historian Kenneth Stamp (America in 1857: A Nation on the Brink) relates….a consummate “doughface”….meaning he was northern man with southern principles.

The nation was taking sides and doing so rapidly. Viewing Buchanan’s actions today and through our 21st Century eyes it can be said he simply didn’t get the political realities of the time. When he discussed the problem of slavery he returned time and time again to the Constitution (which isn’t necessarily a bad thing), but the North wouldn’t hear of any Constitutional arguments that favored the South, and he could not grasp the fact that sectionalism had taken hold and altered exisiting political parties. The Democrats had split in two….the Whig Party was no more….and the Republicans were still testing their legs.

While the Democrats argued that they had been poisoned by abolitionists a more sane reason for the outbreak has to do with the unsanitary conditions at the National Hotel and in the city of Washington itself. Many sources states the winter that year was particularly frigid and the hotel plumbing had frozen leading to a backup of sewage that overflowed and contaminated the hotel’s kitchen. Another theory suggested rats had drowned in the hotel’s cooking water.

President Buchanan held that secession was illegal, but if a war was fought over secession it would be illegal as well. Therefore…..he did nothing and his non-action is remembered as the worst single failure by a United States President.

At the pre-inauguration event held at the National Hotel many men had gathered to have dinner and make speeches with President-elect Buchanan. Many of those in attendance were Southerners. Afterwards a virulent strain of Dysentery broke out among many of the attendees including Buchanan.

Once the outbreak was realized the Southerners cried that a plot was afoot managed by the Republicans and their abolitionist friends to wipe out Democrats. Many of the stricken guests remained sick for months and even years. Several died. President Buchanan spent the first six weeks of his presidency in bed. Some of those who died were Mississippi Congressman, John Quitman (I referred to at the beginning of this post), Pennsylvania Congressman, John Gallagher Montgomery, and New Hampshire Senator John Parker Hale.

So, how does all of this relate to today’s Washington? As I stated before the hygiene of Washington is much better today, but the political climate?

While it will be nice to finally reach that finish line of voting day in November I fear the tug-of-war will not be over until the common man….you, me, and that guy over there standing on the corner rises up and tells those entrenched in our nation’s capitol to go home….but why would we want to do that? That would mean we would get involved, we would take responsibility, we would then have ownership of the problem.

Perhaps that is what this country needs.
The picture presented at the beginning of this post was taken during Buchanan’s inauguration and is considered to be the first photograph of a presidential swearing-in.