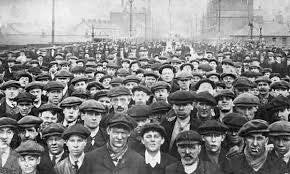 The Industrialization of Europe, occurred between 1750 and 1914, starting in Britain, and was marked by three phases, each associated with a different region and technology. It was accompanied by many changes:

Clive Trebilcock, delineates the three phases of industrialization- the first phase pioneered by Britain (1780s -1820s) the second phase (1840-1870) saw France, some areas of the German States and U.S.A. industrialize, while the third phase (1890s-1914) saw Italy, Japan, Sweden, Austria, Russia and in parts Spain and Hungary industrialize.
SOCIAL CHANGES- The industrial revolution had far reaching social consequences, which varied across class and regions. Between the late 18th and early 20th centuries, (i)new family and class structures emerged to adjust to the new wage economy and production shifted out of the house to large scale production in factories. (ii)Industrialization also caused population migration from rural areas to urban areas, as factory emerged around towns. Marvin Perry says in 1800, about 10% of the Europeans lived in cities. But by 1850 this increased to -52% of Englishmen living in cities, 25% Frenchmen and 36% Germans. As rural production couldn’t compete with cheaper factory production, rural workers moved to work in factories.
IMPACT ON CLASS STRUCTURE: Industrialization and capitalism greatly impacted class structure. Marvin Perry says industrialization of Europe destroyed forever the old division of society into clergy, nobility and commoners and led to the creation of a new class the working class and the growth of the middle class or bourgeoisie.
IMPACT ON WORKING CLASS: Industrialization gravely impacted the mass of workers who participated in the new wage economy and as Karl Marx said had nothing to survive on but their labour. Peter N Stearns says that the early decades of industrialization in Britain and France (1780-1840s), most industrial workers lived in great hardship barely meeting their subsistence needs, as wages were kept low and prices rose. Crisis such as illness and old age brought misery for many. However Stearns points out that the most fundamental transformation for workers was in work experience.
Factory production transformed the traditional rhythm of the labour force which came from agricultural/craft backgrounds. Thus two interlinked aspects of work experience transformed were- (a) the notion of time and (b) work discipline. E.P. Thompson explains this was because changes in manufacture now demanded greater synchronization of labour and greater exactitude in time routines, simply because time was money in the new wage economy.
IMPACT ON ELITES –THE MIDDLE CLASS OR BOURGEOISIE

IMPACT ON THE FAMILY:
From the 1980s, historians focused on changes in families of the industrial revolution, focusing on women and children specially. Lynn Abrams defined the family as follows, “The family is a set of social relationships connected by blood, property, dependency and intimacy.” She says family as known today- as a hierarchical kin community, living under one roof” developed only in 18th/early 19th century in Western Europe. Before that family denoted a relationship of dependency on the head of the household and not necessarily blood ties.

The shift of work outside the house and the earning of individual wages by daughters and children had important repercussions.

However Tilly and Scott also point out that the transformation of the family was widespread yet all families didn’t shift to the family wage economy, in France especially compared to Britain small farms with family production died out only in the early 20th century.
20th CENTURY: In the early 20th century the family structure changed further as industrialization matured. The nuclear family with the conjugal relationship at its core emerged in the late 19th century becoming the norm in the 20th century. The early 20th century, saw changes in working class married women’s work life. The number of married working women declined. This was due to five main reasons-
In conclusion the 19th century middle class norm of the mother at the centre of the family as a homemaker or ‘angle in the house’ and the clear cut gendering of spheres, became the widespread in working class households by the late 19th/early 20th century. This was one of the main social legacies of industrialization and capitalism in the 19th and early 20th century, interlinked to the development of a working class and growing bourgeoisie, which changed the social fabric of Western Europe.