Rise of Nazism in Germany 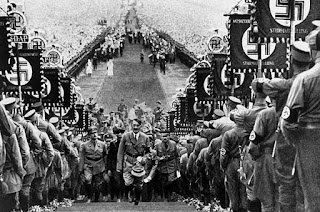 The proclamation of the Republic in Berlin in November 1918 appeared to most as marking the beginning of a new day for the German people and their nation.  However, this republic founded on a discredited revolution and burdened with a number of post-war problems could not last long in a country that was not ready to accept a more liberal, parliamentary form of system. Thus, the Republic had been reduced to a sham long before it was formally overthrown. It was in a situation like this that the Germans required and eventually got a more stable, effective of government led by a charismatic leader, who could help in resolving their problems and restore the lost prestige of Germany in the international sphere. Hitler’s rise to power in Germany, thus, has to be seen in the light of a number of factors that had come up in the post-war republican Germany and it should also be understood in the context of Germany’s historical ties with a totalitarian and autocratic form of government.

Thus, to conclude one can see that a number of factors played an instrumental role in bringing Hitler to power. While, it would be correct to say that the ideology and personality of Hitler had created a strong support base for his party, which enabled him to come to power through constitutional means, one should not ignore the failures of the Weimar Republic as being responsible for his rise. Faced with the daunting task of reviving the lost political glory and damaged economy of post-War Germany, the Weimar Republic was unable to garner popular support that was essential for its survival. Moreover, as seen above it was the hatred of the conservative elite for a parliamentary form of government that further increased its weakness and enabled Hitler to come to power. Within seven weeks of assuming power, the Enabling Act was passed, which transferred overriding powers to the cabinet and ended the dependence on the parliament and the President. Thus, a new era had started in the history of Germany and Europe, which was to have disastrous consequences in the future.