Rise of Fascism in Italy 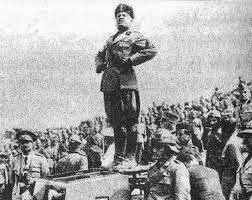 The inter-war period in Europe witnessed a number of drastic changes on the continent as a whole and specifically in some countries. One such change that occurred in Italy was the collapse of the liberal democracy and the rise of a new Right-wing ideology known as Fascism under the leadership of Benito Mussolini. It was on October 28th, 1922 that Mussolini had launched his ‘March on Rome’ that enabled him to capture power in Italy. The rise of Mussolini has become a matter of great historical debate. Some historians have seen the rise of Mussolini purely as a product of Mussolini’s opportunism, while, others have seen it as a outgrowth of Italian History and especially as a response to the problems that confronted Italy in the post-WW1 scenario.  In order to understand the rise of Fascism in Italy it is not possible to consider both these aspects in isolation from each other.

Thus, to conclude one can see that the rise of Fascism in Italy could not be attributed to one single factor. It was a combination of both Italy’s progressive decline, which was an outcome of its historical legacy and the opportunism and personality of Mussolini. Mussolini was able to exploit the political vaccum that had been created by the feebleness of the liberal Risorgimento government in domestic and foreign affairs along with the twin myths of Bolshevik danger and ‘mutilated victory’, which pushed Italy into the embrace of fascism. It was with the rise of Mussolini to power that a new era had started in the history of Italy and the world that was to have disastrous consequences.