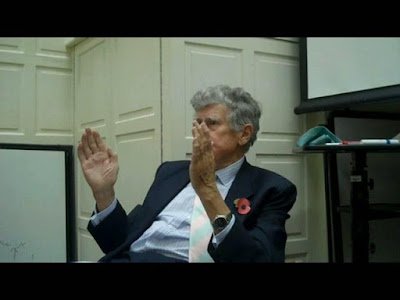 Each man’s death diminishes me. John Donne’s words echo in my mind as I think of the death, first heard of late last night, of Professor Ken Minogue (whoever called him Kenneth except as a joke?), a towering intellectual and writer, a man who thought deeply about our society, our basic ideas and our political structures, and expressed his ideas lucidly and entertainingly. He was also a friend of whom I was very fond and with whom I spent many hours, eating, drinking, talking, laughing and joking. His death definitely diminishes me.

With his permission I shall quote Ed Feulner‘s account of Ken’s last hours:

Last night Ken Minogue and I shared the duties of the chair. I did the thanks, and Ken the introduction of Allan Meltzer, who spoke to us via teleconference. Over dinner, Ken was in great humour, telling us about the next book he was working on, etc. Earlier in the week he had given a fine paper, and yesterday afternoon he chaired a session with that fine, delicate and yet steady hand that made him so beloved to all.

This morning 8 of us were on a bus tour looking at iguanas, sea lions, birds, etc, and enjoying ourselves immensely. Then we went back to the town of San Cristobal, had sandwiches and an hour later left for the airport. Westholms, Lals, Feulners, Fr. Sirico and Ken Minogue.

After our lunch, we went to the Galapagos airport, where the group was split between two flights to Guayaquil, an easy hour-long flight back to the mainland (on an Airbus, not a small plane.) Ken and many of the others were on the other flight.

Our flight landed first at Guayaquil. The other plane ten minutes later. We were collecting our luggage when we heard the horrible news that Ken had been stricken on the plane (a heart attack, we assume). There were four MD s on the plane, including two from the MPS meeting. They tried everything, but to no avail.

Sad though it is to think of the book that will not be finished, there is some pleasure in the description of Ken working, talking, being on top of the world to the last. And there is pleasure in knowing that his other books and articles, essays and recordings are with us. RIP Ken.