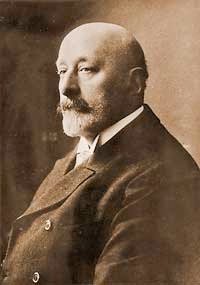 APPLY FOR THIS OPPORTUNITY! Or, know someone who would be a perfect fit? Let them know! Share / Like / Tag a friend in a post or comment! To complete application process efficiently and successfully, you must read the Application Instructions carefully before/during application process.
Investigating the original historical pedagogical experience in the activity of the distinguished enthusiasts of the world education development in period of 19th – beginning of the 20th centuries is of great scientific interest for us.
My research focuses on the history of my country in accordance to its status of the part of the Russian Empire at that period. In my opinion, pedagogical experience of Nikolay Neplyuev can be of serious interest for researcher.

He was born in  a very famous noble family. His father was close to the Royal House and headed the nobility in  province.
Neplyuev was an extremely religious person since his youth. Having received an excellent educational at the university (he graduated from St. Petersburg university), he soon came to the conclusion that the Russian society was not perfect and fell short of high ideals of orthodox Christianity. His searching for the ways to creating the new and highly humane society led him to conducting the famous and successful social experiment through organizing the community “Крестовоздвиженское трудовое братство” (“Exaltation of the Cross labour brotherhood”). The activity of this community was researched by many scientists: historians, sociologists, theologians. My research seeks to present Nikolay Neplyuev’s pedagogical investigations results.
The practical result of Nikolay Neplyuev’s educational activity consisted in opening two agricultural schools (one for boys and one for girls) in 1881, and a prep school in his estate in province. The founder considered them to be a basis for forming since childhood the future ideal society.
How to Stop Missing Deadlines? Follow our Facebook Page and Twitter! Jobs, internships, scholarships, Conferences, Trainings are published every day!
Follow @plopandrew

Summing up the results of Nikolay Neplyuev’s and his like-minded colleagues attempts, the fact of appraising the successful activity of these educational establishments is generally admitted. There were some peculiarities of these schools working far from big noisy cities in the silence of patriarchal village.

The first obvious condition of Neplyuev’s work efficiency was his confidence in the deep religiousness of the rural population. He easily gained respect of the rural population by his views on upbringing their children grounding on deep respect of Christian values.
According to his views, the founder of the schools could effectively connect the process of teaching children with raising them on the basis of Christian moral tradition. Neplyuev himself actively taught boys in the boys’ school while his mother and sister conducted lessons in the school for girls. One of the traditions of the boys’ school was to hold weekly classes (on Saturdays) about the real sense of Christian study.

Using understandable for children examples from the Holy Writing Neplyuev tried to make bring them understand the sense of human brotherhood and human love to close people. The founder’s experience of introducing to the school practice two circles: groups of senior and junior pupils (Rus. − “круг” (circle)) was a success. The first one united children and teachers in discussing pupil’s behaviour, and second one included only children.

The experience of moral teaching was positive, when every new pupil could choose his own mentor amongst the senior pupils. Every mentor had a copybook where he noted his ward’s behavior. Later, at the meetings, this was discussed and everybody could share his own opinions regarding the behaviour of different children and even of the mentor.
The activity of these schools during the whole history of their existence formed the basis for their founder’s developing his idea of forming the labour community. More than half of school leavers joined the community voluntarily after graduating from school.

During his pedagogical explorations, Nikolay Neplyuev had to overcome the most serious in his view problem of providing qualified staff for his schools. The trouble was that most teachers couldn’t grasp the essence of founder’s deep educational ideas and they often did not share his views. After some years of efforts, Neplyuev obtained the authorities’ permission to employ the graduates of his schools as teachers. Later he considered it to have significantly improved the situation.
We consider it to be a great confirmation of Neplyuev’s project success that even after his death in 1908, the community as a social institute its household and schools existed for several more decades. Their liquidation in the late 1920s was caused by Soviet authorities’ policy.
We managed to restore a lot of different pedagogical innovations of Nikolay Neplyuev both in the sphere of upbringing and teaching.

A more detailed account of our research will soon be published in History of Education Researcher.
Posted by Charlotte Rochez at 15:56 No comments:
Email ThisBlogThis!Share to TwitterShare to FacebookShare to Pinterest
Labels: 1850-1950, History of Education outside the UK

The history of Scottish education: a window to the rural world

I’m currently undertaking ESRC doctoral research into the history of the small rural schools of Scotland. Focusing on the period 1872-2000, I’m exploring a number of themes (including gender, citizenship and the nature of rurality) with an overarching emphasis on the role that these schools and their teachers played in community life. As well as drawing on archival evidence (both local records and central government files and reports), I’m undertaking oral history interviews to get a sense of lived experience and the material gathered to date is fascinating on so many levels.
For me, then, the history of education is very much a window to the socio-cultural, political and economic changes and continuities of the late nineteenth and twentieth centuries. On one level, researching the intricacies of the education system itself, of policy and practice in relation to administration and governance, curricula, staffing and the like, opens up many lines of debate. Whether it be the professionalisation of teaching, the development of secondary education or the shift from local school boards to county education authorities, there is much to be gleaned from their examination. At the same time, exploring the everyday lives of those involved in education, a mere glimpse of which is given in the sources, is both captivating and historically important.
To give an example of this, I would like to share with you a few short extracts from the School Log Book for Fearnan School in Perthshire, Scotland.[1] Written between 1917 and 1918, these make specific reference to the First World War and the value of their content speaks for itself. The entries were written by the headmistress Miss Lizzie McLaren Roberts. 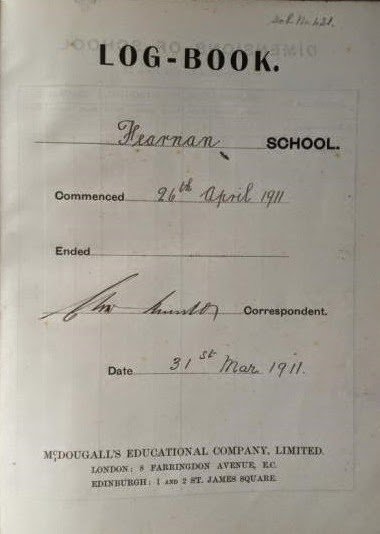 25th May 1917
The scholars were much grieved today to learn of the death of Hugh Cowan who fell in action on the 3rd May. He was well known having been brought up in the village and until he “joined up” had been a shepherd with his father at Balnearn.
25th October 1918
Attendance reduced owing to various causes. One girl absent owing to parents having gone to Northampton to visit their son who has been seriously wounded … Sad news reached the village this week – the death through gas-poisoning of another of our brave soldiers at the Front. Duncan Fraser an old pupil of this school was amongst the first to “join-up” and has been in “the thick of it” for a considerable time.
8th November 1918
Again sad tidings! The brother of the brave soldier referred to a fortnight ago has succumbed at the Western Front to pneumonia whilst another who has been in the Transport Service for some time has been killed. Both these lads had seen four years’ service in the army and both deserved the high enconiums passed upon them by the villagers. Both were much beloved and are much mourned. A parcel was sent to one of our wounded soldiers in hospital by the children here. Each child also wrote a letter to him. 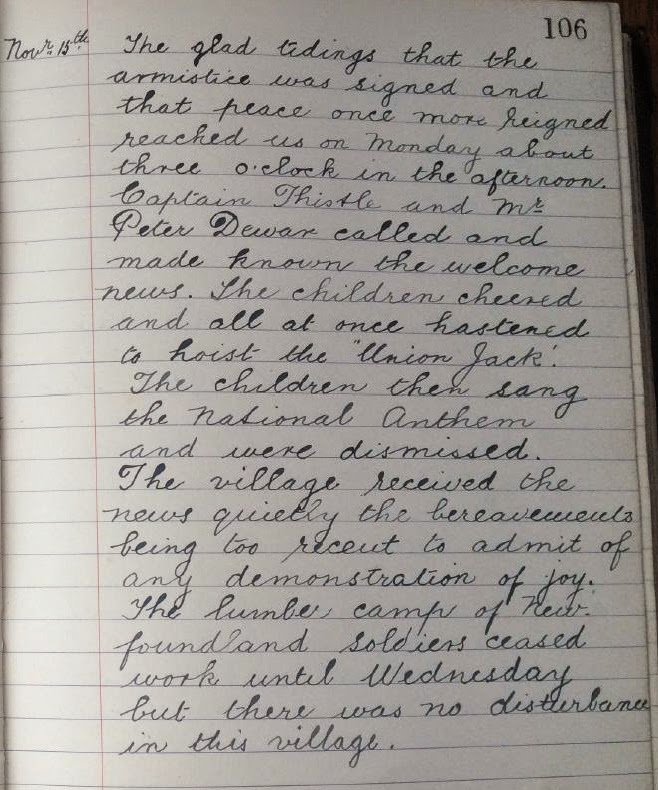 15th November 1918
The glad tidings that the armistice was signed and that peace once more reigned reached us on Monday about three o’clock in the afternoon. Captain Thistle and Mr Peter Dewar called and made known the welcome news. The children cheered and all at once hastened to hoist the “Union Jack”. The children then sang the National Anthem and were dismissed. The village received the news quietly the bereavements being too recent to admit of any demonstration of joy. The lumber camp of Newfoundland solders ceased work until Wednesday but there was no disturbance in this village.