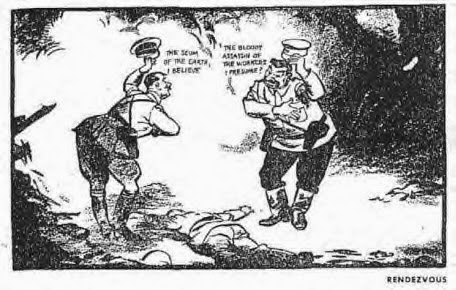 On September 17, 1939 the war that is known as the Second World War entered its crucial phase though, possibly, this was not recognized at the time. The Soviet Union, acting in accordance with the Pact that the two Foreign Minister, Molotov and Ribbentrop had signed, invaded eastern Poland, thus squeezing the Polish army and the population of that country between themselves and Nazi Germany.

One cannot really ignore Low’s brilliant cartoon on the subject.

Here is a photograph that remains one of my favourites from that period and that region: the jolly meeting at a German military parade in Brest of two tank commanders, General Heinz Guderian and General Semyon Krivoshein who was, as it happens, Jewish. Astonishingly enough, General Krivoshein survived two purges: that of the armed forces in 1938 and that of prominent (and not so prominent) Jews in 1951. As the great Sovietologist, Robert Conquest, said to me when I asked him why he thought Krivoshein survived: “Someone had to”.

Both generals were prominent in the Battle of Kursk. Friendships between tyrants have a short life.