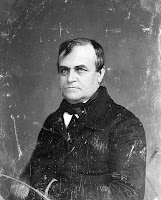 By simply relying on the textbook my students learn that between 1840 and 1860 the number of immigrants arriving in the United States rose sharply. However, people didn’t begin streaming in the doors as the year 1840 arrived.

They had been arriving in steady ebbs and flows for years, and during the 1830s large numbers of people arrived from Ireland.

A rise in immigrants along with new technologies due to the Industrial Revolution led to many changes in America. Urban areas grew larger while rural areas declined.

But there were other issues as well….one that escapes most textbook writers.

The story I want to share with you today is an interesting tidbit of Rhode Island history that is rooted in their colonial and immigration history, however it provides opportunities for any American History student.

The event I’m referring to is known as the Dorr Rebellion.

In order to fully under the Dorr Rebellion we need to remember how the colony of Rhode Island came to be. After Roger Williams was banished from the Massachusetts Bay Colony regarding his religious differences a charter was granted from the King of England to form a new colony. The original charter from 1663 was like many at the time….providing the vote for men who owned property. This made sense since the majority of men who immigrated to the colonies had agriculture on their minds and the process seemed fair….at the time.

Over the next several years, however, the economy of Rhode Island along with the economies of many of the Northern states changed due to the Industrial Revolution. Waves of immigrants meant that huge chunks of the population lived in urban areas and owned no land resulting in disenfranchisement. In fact, this Rhode Island history site advises by 1840, 60 percent of free adult males were unable to vote in the state.

There had been several attempts to change the charter of Rhode Island over the years, but those attempts met no success. People argued the charter had been signed by a British monarch and therefore had no place in an independent nation. Others argued that the charter violated the Article 4, Section 4 of the United States Constitution where there is a guarantee to every state in the Union that they shall have a republican form of government. The charter also provided for no amendment process.

Finally, the people of Rhode Island became tired of the ineffectiveness of their state legislators to handle the problem and they began to act on their own. In October, 1841, the People’s Convention was formed where they actually drafted a Constitution on their own. Their new Constitution provided the vote to all white men who had been residents of the state for one year. The People’s Convention and the push for a new state constitution was led by Thomas Wilson Dorr and the people around him…his supporters are often remembered as Dorrites. Unfortunately the state legislators didn’t take kindly to the people acting on their own and formed a rival conference where their Freeman’s Constitution was drafted. The People’s Constitution was ratified in popular referendum in December 1841 and under this document Dorr was elected governor in April 1842.

The reformers were resisted by a “Law and Order” coalition of Whigs and rural Democrats, who returned incumbent Governor Samuel Ward King to office in a separate election and then used force and intimidation to prevent the People’s Constitution. When Dorr responded in kind by unsuccessfully attempting to seize the state arsenal in Providence on May 18, 1842, most of his followers deserted the cause, and Dorr fled into exile. To add insult to injury Dorr’s father and uncle sided against him and took part in defending the arsenal.

The “other” governor of Rhode Island at the time also wrote President John Tyler requesting Federal toops. President Tyler had his own concerns regarding his rise to the Oval Office and knew he had to tread lightly regarding the situation. See his reaction in my article over at American Presidents Blog here.

When he returned in late June to reconvene his so-called People’s Legislature in Chepachet, a Law and Order army of twenty-five hundred marched to Glocester and sent the People’s Governor into exile a second time.

In September, 1842 another convention was called to write a new Rhode Island Constitution. This time the document provided the vote for all men regardless of color with a poll tax of $1.00. The Dorrite document had not mentioned any race other than the white population…not because Dorr wanted to refuse the vote to blacks. He had merely caved under pressure in 1840 from the white immigrant population.

For his part in the rebellion Dorr received a very harsh sentence….he was found guilty of treason and was sentenced in 1844 to solitary confinement at hard labor for life. Many people condemned the sentence and he was finally released in 1845 and his civil rights were restored in 1851. By 1854 the court judgement convicting him was set aside.

This little known chapter in Rhode Island history can have great application in the classroom today for students to analyze.

This situation provides more observation regarding the effects of the Industrial Revolution and immigration in early America that would make an interesting discussion with the addition of today’s issues surrounding legal and illegal immigration.

We also have the issue regarding the Guarantee Clause of the Constitution (Article 4, Section 4) and how President Tyler handled the request for Federal troops given that Tyler was already under attack for assuming the presidency has he did and considering he was attempting to get re-elected in his own right.

Then there is the Supreme Court case arising out of the Dorr Rebellion – Luther vs. Borden. The Constitutional question addressed in the case involved Article 4. Martin Luther was a participant in the Dorr Rebellion. He was arrested by Borden, a state official. Borden searched Luther’s home and allegedly damaged property. Luther asked the court to find that Borden had acted with no legal authority. The Supreme Court found it was up to the Executive and Legislative branch of the government to enforce Article 4, and it was outside the legal jurisdiction of the court to rule upon. The ruling established that the “republican form of government” clause was non-justiciable, and the ruling that still holds today, however, the Fourteenth Amendment includes the Equal Protection Clause.

Other questions involve “We the People” – For example, can “We the People” rise up when circumstances dictate that our government is no longer seeing to the needs of the people?
When is it acceptable to go against the people currently in power?