….If the Creeks Don't Rise 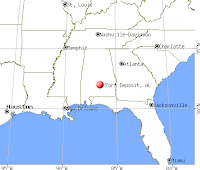 ….If the Creeks Don’t Rise

There are so many interesting points to bring up when discussing the War of 1812 – the writing of the Star Spangled Banner, the tornado that actually killed more British during the Washington D.C. invasion than bullets, General Andrew Jackson’s successful attempt to unite the people of New Orleans for its defense, Dolly Madison’s quick action to save the Gilbert Stuart painting of President George Washington – and the list goes on.

It’s sad really that so few Americans know about this time in American history, but I believe our first performance on the world stage defending American shores is worthy of our scrutiny, and teaches valuable lessons for all of us.

Coming home from our annual “It’s Fall, Ya’ll!” trip to Perdido Key on Alabama’s Gulfcoast I noticed an exit sign along the expressway. It read “Fort Deposit”.

“Fort Deposit,” I thought, “ Hmmmm….there has to be a story behind a place with a name like that.”

My research tells me that the town of Fort Deposit, Alabama dates back to 1813 and began as Fort Deposite or Fort of Deposit set up by General Ferdinand Claiborne under orders from General Andrew Jackson to set up a location for ammunitions supply. The location of the fort was important. The bluff it sits on the highest point between Montgomery and New Orleans. It was also located along the Jackson Military Road which linked other military camps in the area.
So……what ‘s the big deal? During the War of 1812 Jackson needed an ammunitions supply depot, and Claiborne set it up.

It’s just another little factoid in the war with the British, right?

In 1813, Alabama was not yet a state and was considered to be part of the Mississippi Territory. While there were white settlers living in the area there were members of the Creek Indian Nation living there as well and in greater numbers.

The clash within the Creek Nation began soon after the New Madrid Earthquake in 1811. Many of the Creeks who supported the Red Sticks interpreted the Earth’s movements as a sign….a sign that the Creek Nation should return to traditional ways and leave white culture alone.

By 1813, interference from the Spanish and the English pushed the Americans into the Civil War. White settlers in the immediate area were not threatened until a group of whites attacked a Red Stick supply train close to Burnt Corn Creek in July, 1813.

In retaliation the Creeks marched on Fort Mims in August, 1813 where they massacred men, women, and children. Depending on the source used anywhere from 250-550 settlers were murdered. The folks at the Fort Mim’s site explain that the saying, “the good Lord willing, and the Creeks don’t rise” came about following the massacre…..and you thought that saying had something to with water and flooding, didn’t you?

Militias in Georgia, Tennessee, and the Mississippi Territory formed ranks and marched to the Fort Deposit area.

Fort Deposit served as a base of operations for Claiborne and his men during the Battle of Holy Ground in December, 1813. Holy Ground was the settlement founded by Josiah Francis, a Creek prophet and one of the leaders of the Red Sticks. Holy Ground was located along the banks of the Alabama River. Ceremonies had been performed at Holy Ground to establish a barrier the Creeks believed would destroy any white men who invaded the settlement. One of the most exciting moments of the battle occurred when William Weatherford, a Red Stick warrior and leader (also the son of a white man and a Creek woman), attempted to find a place along the high river bank to escape from the advancing Americans. The story goes Weatherford spurred his horse forward and leaped to the river below.