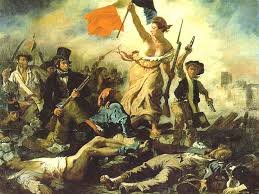 The French Revolution has perhaps attracted more attention in history than any other event and its study involves what other professional historians have said about it.
THE MARXIST INTERPRETATION –
The ‘classic’ interpretation of the French Revolution in historical scholarship was the Marxist approach which sees the French Revolution as a bourgeois revolution, marked by class conflict. The French Revolution was not simply a political struggle from an absolute monarchy to democratic republicanism but represented a deeper shift from feudalism to capitalism. According to the Marxist historians, the Revolution was led by an alliance between the bourgeois elite and popular classes against the landowning nobility. The greatest success of such an alliance occurred in 1789 but by 1791, revolutionary events were marked by class conflict which in turn produced an urban political movement by the sans-cullotes. The Terror represented the pinnacle of the sans-cullotes movement. Thus, the French Revolution was essentially a class struggle in which the nobility was destroyed, the class of the sans-cullotes was awakened and the bourgeoisie won control of the state. The scholars who advocated this view include – Alphonse Aulard, Albert Mathiez, Georges Lefebvre, Albert Soboul and Michel Vovelle.

Most scholars accepted the Marxist theory of class conflict. However the argument of the Marxist school began to be questioned which led to an enormous transformation in the scholarship on the French Revolution. It was marked by the almost total collapse of the orthodox Marxist interpretation and a range of sharp attacks on virtually all of its major points and approaches leading to a complete collapse of the Marxist paradigm.

THE REVISIONIST INTERPRETATION –
The Revisionist historians, who critiqued the Marxists, were of the view that the French Revolution cannot be seen as a bourgeois revolution which destroyed feudal political structures. The revisionists insist that class struggle played little role in the Revolution and it had nothing much to do with the development of capitalism.
LIBERAL REVISIONISM – The liberals believed that the French Revolution when taken as a whole was necessary to move France from a pre modern to a modern society. According to them, the Ancien Regime had become so paralyzed by its own internal contradictions, that by the 18th century only revolutionary change could resolve France’s grave problems. Liberal historians viewed the revolution as an agent of progress, despite its great faults and demonstrated the virtues of revolutionary change. They explain the excessive violence of the Terror by noting the grave circumstances that led to its establishment.
The works of Cobban and Taylor brought the nobles and the bourgeoisie closer together, both socially and economically and had successfully picked apart much of the Marxist case for the start of the French Revolution. However, by the time Colin Lucas put forward his view in the 1970s, the Revisionist school had become an entrenched minority among the French Revolutionary scholars. The Revisionists remained an iconoclastic minority until the publication of Francois Furet’s “Interpreting the French Revolution” in 1978.
NEO-CONSERVATIVE REVISIONISM – Furet and his collaborators differed from earlier revisionists in one very significant manner as they undermined the very foundations of Liberal historiography.  Usually former liberals themselves, the neo-conservatives turned against the whole idea of revolutionary change as itself illiberal and see the Terror as the essence of the French Revolution. By the 1990s neo-conservative revisionism had clearly become the ascendant interpretation of the historical establishment across the world.
How to Stop Missing Deadlines? Follow our Facebook Page and Twitter! Jobs, internships, scholarships, Conferences, Trainings are published every day!
Follow @plopandrew

Therefore, whether in its older form from Talmon, or its more sophisticated version from Furet, Neo-Conservative Revisionism had clearly become the ascendant interpretation of the historical establishment in England, France and the United States by 1989.
THE NEO-LIBERAL OR POST REVISIONISM INTERPRETATION –  The most important developments in the historiography of the French Revolution have been Neo-Liberal challenges to the position laid out by Furet and his colleagues. Unlike the Revisionists, Neo-Liberal interpretations do not minimize the oppressive character of the 18th century nobility. The aristocracy is seen as a distinct political group with interests opposing those of commoners. The Neo-Liberal arguments insist that the period of the Constituent Assembly was substantively different than the Jacobinism of the Terror. The neo-Liberal interpretations also claim that the collective violence of the Revolution’s early years was necessary to the establishment of a liberal and free state. These historians also challenge the view that the Revolution was a primary failure. According to them, a rising bourgeoisie may not have started the revolution, but the revolutionaries successfully destroyed the Ancien Regime and refashioned a society that made a 19th century liberal state possible. The Neo-Liberals define class more in terms of specific professions and occupations with varied social interests than in terms of a solid group with political interests. These writers stress on culture as opposed to the Marxists social or the Revisionists political reasons for the start of the French Revolution.
Alongside the Neo-Liberal response to Revisionism, the other significant recent trend in French Revolutionary scholarship has been the maturation of women’s and gender history. In the 1970s, with the rise of a contemporary feminist movement, the pace was set towards a new history that took into account the fate of women and used gender as an analytical tool in the general histories or document collections on the revolution. A new research agenda was established for the field which made us realize that women participated in every major event in the revolution and the influence of elite women in the clubs and presses of Paris. Thus the feminist inspired historians instead of identifying women as the primary subject widened the scope to include revolutionary discourse, policies, events and culture; interpreted through the lens of gender. The feminist historians included – Lynn Hunt, Joan Landes and Simon Schama.
It has been seen that the Revisionists and the new feminist scholars shared two essential attitudes about the French revolution. Firstly, both groups believed that the French revolution marked a step backwards for women’s rights. Secondly, both gave credence to the works of Jean-Jacques Rousseau and it was his highly contentious ideas that gave rise to new notions of female domesticity. The post-revisionists, like the revisionists do not have an ultimate theory for the beginning of the French Revolution.