Fess Up! Are You a Sampson Man or a Schley Man?

Fess Up! Are You a Sampson Man or a Schley Man?

When you approach the steps of the chapel on the grounds of the United States Naval Academy you can’t help but notice two very large anchors arranged on each side of the walkway. As with most things on the grounds there is also a plaque advising the significance of the important thing you are looking at. Written upon the plaque presented below one of the anchors is the following:

These anchors known as “old fashioned” anchors were fashioned for our Navy’s first armored cruiser “New York” the flag ship of Rear Admiral William T. Sampson during the Spanish-American War and weigh approximately 10,500 pounds.
I snapped a picture of one of the anchors, and I snapped a picture of the plaque so I wouldn’t forget what it said because I wanted to know more. The simple placement of the anchors in front the chapel and the simple wording on the plaque made me want to know more.

This is something I would certainly use in the classroom with kids to get them to see how a simple vacation moment can lead to learning. What’s so important about this Sampson guy that his name is on a plaque? Couldn’t they have just as easily said the anchors were from the “New York” and leave it at that? Why should the “New York” be remembered for her service during the Spanish-American War?

William T. Sampson graduated from the United States Naval Academy in 1861 at the head of his class. One of his first assignments was serving upon the USS Patapsco as her Executive Officer. After the Patapsco was blown from the water in January, 1865, Sampson was one of very few surviviors rescued from the harbor waters at Charleston.

Following the Civil War, Sampson steadily rose in the ranks of the U.S. Navy where he gained a reputation as an ordance expert. Along with Joseph Strauss he devised perfect superimposed turrents. During his stint as Chief of the Bueau of Ordnance he instituted smokeless powder and improved gunnery training. He was also appointed as Superintendent of the Naval Academy from 1886-1890, and following the explosion of the USS Maine in Havanna’s harbor in February, 1898 Sampson served as President of the Board of Inquiry.

Once war was declared Sampson became the acting Rear Admiral of the North Atlantic Squadron with 125 vessels under his command.

On declaration of war against Spain in April, [Sampson] proceeded from Key West to institute a blockade of northern coast of Cuba, his own plan to attack Havana directly having been overruled by the Navy Department. In May while location of the Spanish fleet under Admiral Cevera was yet unknown, he made a cruise east to Puerto Rico and on May 12 bombarded San Juan. He then returned to blockade and joined by “Flying Squadron” under Winfield Scott Schley, who, though technically his senior, was placed under his command for the campaign. He sent Schley to reinforce the blockade of the southern coast, particularly at Cienfuegos and Santiago. Schley was tardy in movements, and Cevera slipped undetected into easily defended harbor at Santiago. When he was finally discovered there, Sampson concentrated his forces outside the harbor. He supported landing of Shafter’s army at Daiquiri, June 22, and the capture of Siboney next day, and the subsequent advance to Santiago.

Following capture of San Juan heights commanding the city on July 1 he and Shafter arranged a shore conference to plan a coordinated land-sea assault. On the morning of July 3 aboard the USS New York, headed for the conference point some miles to east. Half an hour later the first of Cevera’s ships appeared, steaming out of harbor to west. The Blockade Squadron, under the immediate command of Schley, went instantly into action and in less than 4 hours entire Spanish fleet was sunk or run ashore. The battle took place entirely to west of harbor entrance, and the New York was out of it altogether.
From the Spanish American War Centennial Website more can be learned:

Sampson unwittingly sowed additional seeds of discord as he approached Schley’s ship after the battle. After receiving an effusive signal from the bridge of the BROOKLYN (“This is a great day for our country!”), Sampson responded with a terse “Report your casualties.” Nonplussed, Schley reported the small number of American casualties (one dead and two wounded), and continued sending congratulations to the other ships that had contributed to the victory. In a subsequent telegraph to Washington from the base at Siboney, Sampson did allow himself some elevated prose (which conspicuously omitted Schley’s name): “The fleet under my command offers the nation as a Fourth of July present the whole of Cervera’s fleet.” In Sampson’s home town of Palmyra, New York, the local citizens gave him a 100-gun salute on the Fourth of July. A New York Times article recounting Sampson’s hometown welcome can be found here.

The wartime discord with Schley and Shafter would plague Sampson for the rest of his life. Controversy brewed over who deserved the credit for the destruction of Cervera’s fleet. In the days immediately following the naval battle of Santiago, reporters attached to the American forces noted that Sampson’s initial report of the victory failed to mention Schley by name, and speculated about possible dissension between the two commanders. Although some newspapers sided with Sampson (the Atlanta Constitution, for example, trumpeted as its headline “Sampson Burns and Sinks Cervera’s Ships” and asked its readers “Now, what ‘Dewey’ think of Sampson?”), many hailed Schley as the true hero. On 6 July, the Baltimore American, which was owned by Schley’s friend General Felix Agnus, declared Schley the victor and accused Sampson of “not having the grace even to mention Schley’s name.”
A Court of Inquiry over the matter was held in 1901 with Schley finally getting some recognition. While many don’t realize it today the whole matter was a very devisive one for the U.S. Navy with many having to make the choice of being a “Schley man” or a “Sampson man”.

An American Heritage article relates most of the devisiveness began with a 1901 Annapolis textbook. The book, a history of the U.S. Navy, accused Schley of cowardice at the 1898 Battle of Santiago. Schley, of course, took great issue with this. The article goes on to state that the Court of Inquiry actually had a split verdict, the majority supporting Sampson and the minority backing Schley. They also pointed out that Sampson had not reached the fray until the shooting was over and Schley had defeated the entire Spanish fleet. The American Heritage article further purports that Sampson Hall, located on the campus of the Naval Academy, attests to the Academy’s acceptance of the majority verdict. To find an image or reference to Schley you have to visit the Maryland State House where a bust is on display. There is a bit of irony here……the issue came to a head from a history textbook. The building that carries Sampson’s name houses the history department.

In the years that followed, Sampson’s adherents repeatedly emphasized that, though Dewey and Schley had reaped much of the glory of victory in the naval war of 1898, it was Sampson who had laid the foundations for their successes. In the words of naval historian Carroll Alden, Sampson had proven his mettle as “the great builder and organizer” of the Navy at the end of the nineteenth century. He had zealously championed a scientific education that would better serve American officers in a technologically evolving Navy. Further, the American Navy of 1898 owed much of its firepower to Sampson’s prewar tenure as Chief of the Ordnance Bureau. Ninety-five percent of the American guns used at the naval battle of Santiago, as well as a large portion of the guns used at Manila Bay, had been forged under Sampson’s direction: “From 1892 until the outbreak of the Spanish War, every gun built for the Navy was designed and constructed under the supervision of Sampson, and the large guns were all upon his personal design.” For Alden, the triumph of 3 July 1898 was “the logical fruition of plans which (Sampson’s) own genius had devised and set in motion; that is, it was won by officers whom he had drilled, on ships that he had constructed and armored, equipped with guns he had built.” At this “grand climax,” Sampson was “as much in the background as is a dramatist at the initial performance of his play.”
You really never know where a bit of research will take you. This is probably the most facinating thing about history and history research that propels me to do what I do. You see, through my research regarding finding out a bit more about William T. Sampson I discovered that in 1909 a memorial window was unveiled at the chapel in Annapolis as a tribute to Sampson. It was reported in the New York Times. This led me to search for a description of the window. I knew I had taken several photos within the chapel and many included the priceless Tiffany stained glass windows, but I didn’t know which one had been dedicated to Sampson. After several failed Googles I discovered the Sampson window is also known as the Angel of Peace, and it is one of the three main windows. The other two are dedicated to Admirals Porter and Farragut. I knew the main window was dedicated to Admiral Porter, and I knew Farragut’s window contained an image of the Archangel Michael. This led me to realize I had taken an image of the Sampson window and here it is: 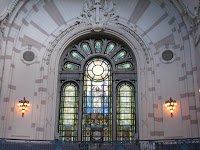 So….I do believe the next time I pull out that dusty old Spanish American War unit I might have students learn a bit more about Rear Admiral Sampson and his “opponent” Schley.

I could put the question to students….”Are you a Sampson man or a Schley man?” and have them back their answers up with proof in the form of research.

Which man are you?