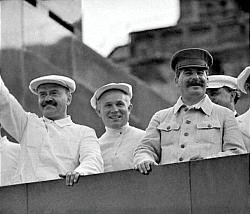 History Today rightly points to the most important event in modern history that happened on this day in 1956: Khrushchev’s so-called secret speech (it was, actually, secret in most of the Soviet Union and, theoretically, other Communist countries though the text had reached the West), which, once and for all, undermined the legitimacy of the Communist system even with people who believed in it.

It was an extraordinarily dangerous and daring thing for Khrushchev to do. Solzhenitsyn believed that he spoke out of ‘a movement of the heart’, a genuine impulse to do good. Others have pointed out, more cynically, that it tarred other party leaders with the Stalinist brush, to the ostentatiously repentant Khrushchev’s advantage. It deflected blame from the party and the system on to Stalin’s shoulders. A few months later it was announced that the congress had called for measures ‘for removing wholly and entirely the cult of the individual, foreign to Marxism-Leninism… in every aspect of party, governmental and ideological activity.’

On the whole, I am inclined to the second explanation. Call me cynical, if you like, but the deflecting of the blame is exactly what happened and Khrushchev’s rivals were eased out of their position. Then again, none of them were imprisoned or shot, which is was a great advance in political methodology.

The two pictures I have chosen illustrate quite well where Nikita Khrushchev, himself a veteran of purges, the Ukrainian collectivization and of the Moscow metro construction, fitted. Maybe he did suddenly decide that he had to do something to make up for the blood on his own hands. Maybe.