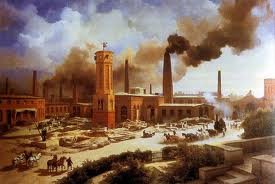 The Industrialization of Europe, occurred between 1780 and 1914, starting in Britain, and was marked by three phases, each associated with a different region and technology. The Industrial revolution refers to structural changes in the economies of certain European countries in this period, which were as follows-

Clive Trebilcock, delineates the three phases of industrialization- the first phase (1780s-1820s) was pioneered by Britain, the second phase (1840-1870) saw France, some areas of the German States and U.S.A. industrializing, while the third phase (late1890s-1914) saw Japan, Italy, Russia Sweden, parts of Spain, Hapsburg empire and Hungary industrialize.
CAUSES:  Prior to the mid-18th century all European economies were marked by a large agrarian sector and craft manufacturing carried out by manual household labour, within the house, for local or regional markets. Such manufacturing required little capital and was labour intensive. By 1700, Peter .N. Stearns says Western Europe was an advanced agricultural society with an unusually large commercial sector. In the 18th century John Merriman says, it began to register three main changes which accelerated manufacturing and constitute the causal factors/preconditions for the Industrial Revolution-

Peter Stearns adds to these causes and says other conditions prevailing in Europe also contributed to industrialization. The most important cause for him were: