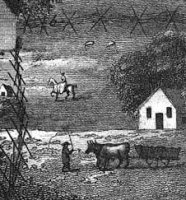 In the mid1800s, Halloween was celebrated “roughly” –  parts of a wagon were put in different trees, gates taken off hinges, wooden steps removed, taking wagons apart and rebuilt in a stable, and other extreme tricks.  And the food history part?  Throwing corn or string beans, hanging beets and cabbages at doors, OK maybe not too relevant, but I am amazed by the caliber of the tricks!

From “Pennsylvania Dutch.”: And Other Essays by Phebe Earle Gibbons.  Phila: 1882 (first appeared in Atlantic Monthly, 1869)

HALLOWEEN.
“On the 30th of last October our farmer locked the gate on the road, lest it should be taken off. Therefore the Halloween visitors limited themselves to taking down bundles of corn-fodder in the field and building a fence across the road, and to propping up one end of the market-wagon on the fence.
I am told of a person who once had his wagon taken apart, and the pieces put up into different trees, so that it was some time before all were found. In Lebanon County a similar custom is found. One of my acquaintances living in a small town says that they celebrate Halloween roughly,—hanging beets and cabbages at the doors, moving steps, taking gates from hinges, throwing corn. The speaker was born in Lehigh County, where nothing of this prevailed, and this fact constitutes one of the chief distinctions among our Pennsylvania Germans of Lancaster and Lebanon on one hand, and Lehigh, Berks, upper Montgomery, and probably Northampton on the other. In Montgomery a young “Dutchman” did not even know when Halloween is, and when I described our Lancaster County custom, said, “That ain’t any use.”

Traces of similar observances of Halloween are found, however, in other regions. In Philadelphia the boys indulge in ringing front-door bells.   In Harrisburg people who had wooden door-steps used to take them into the house, lest they should be carried off. Of Franklin County, beyond the Susquehanna, I am told that at Waynesboro it has been a favorite amusement at Halloween to gather storeboxes and build a fortification around the town pump, and collect wheeled vehicles around the public square. At Lockhaven, up the West Branch of the Susquehanna, my landlady was anxious that her cabbage should be housed, for fear that it would be carried off on Halloween.

My German acquaintances, before quoted, born in the Palatinate, do not report to me anything of this kind as existing in Germany at Halloween. One of them says, however, that at the time of putting up string-beans (which are preserved like sour-krout), children throw the strings into front doors. And Mr. Wollenweber, of Reading, also a native of the Palatinate, says that when the farm-work was over in October, they used to practise tricks. He has helped to take a wagon to pieces, and put it together again in a stable or barn. “We troubled ourselves very much,” he says. He adds that the boys were expected, when the fun was over, to come together and take it down again; but this is not the case in Lancaster County.
Can it be that some of these practices belong to the season of the year, and are a warning to the tardy to gather the fruits of the earth and their farm implements?
In his work called Die Alte Zeite, or Old Times, Mr. H. L. Fisher, of York, Pennsylvania, describes such pranks as played at weddings or home-comings “infares.” The boys hid the bridegroom’s horse in a quarry, and the young men’s saddles and bridles were put upon trees, straw-stacks, etc.