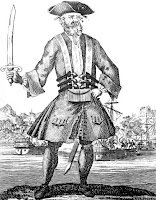 The early life of the pirate known as Blackbeard remains something of a mystery, as does his real name. Edward Teach (or Thatch, or possibly Drummond) probably grew up in Bristol, England, before embarking on a life at sea. Apparently, he signed up with a privateer (a state-endorsed pirate) in Jamaica during the War of the Spanish Succession.

When that conflict ended in 1713, Teach, like many sailors decided to continue the profitable life of a pirate, rather than sign up for a harsher life in the merchant marine or the Royal Navy. He joined Benjamin Hornigold’s crew in 1716, and soon received command of one of Hornigold’s fleet in recognition of his aggression. The following year, they captured the twenty gun, 300-ton French warship, La Concorde de Nantes, originally a British ship called Concord, which Teach took command of.

Teach renamed the ship Queen Anne’s Revenge and doubled its number of guns to forty. In this heavily armed vessel, Blackbeard was able to fight off any Royal Navy ships sent to capture him, while he continued to capture and plunder merchant ships. Reputedly he attacked at least eighteen vessels in a six-month period, developing a reputation as a fearsome pirate.

The legends that surrounded Blackbeard meant that his reputation was often enough for ships to surrender to him, giving him the confidence to undertake his most audacious plan: a blockade of Charleston, South Carolina. With Hornigold having given up piracy and accepted a pardon, in May 1718 Blackbeard took a flotilla of four vessels to the mouth of Charleston harbour, where they plundered eight or nine merchant ships, ransoming their prizes for a chest of medicine before making their escape.

The following month, Queen Anne’s Revenge and one of the smaller ships ran aground at Topsail inlet (now Beaufort inlet), North Carolina. Blackbeard may have done so on purpose in order to limit his crew to his most trusted men, who would consequently receive a larger share of the booty. He sailed to the North Carolina port of Bath Town, where he obtained a pardon from Governor Charles Eden and married a planter’s daughter.

The governor of the neighbouring colony of Virginia, Alexander Spotswood, suspected Blackbeard’s continued piracy under the protection of Governer Eden in return for a share of the spoils. Even though Blackbeard was operating beyond Spotswood’s jurisdiction, the Governor of Virginia decided to finance a expedition by both land and sea to expose the conspiracy and cement his own position, which was under threat from his council. He put a price of £100 on Blackbeard’s head and sent two hired sloops, the the Ranger and Jane, to locate the pirate ships.

On 22nd November 1718, Lieutenant Robert Maynard and his fifty-four men engaged Blackbeard and his brigands at an inlet on Ocracoke Island, North Carolina. As Blackbeard made a run for it in the Adventure, Maynards sloops gave chase but ran aground. After re-floating, Maynard ordered his crews to row after the pirates, there being insufficient wind to deploy sails.

As Jane pulled alongside Adventure, the pirates fired a broadside killing its captain and several of the crew. Maynard continued the pursuit, hitting Adventure’s rigging and forcing her ashore. Maynard then ordered his men to hide in the holds and prepare for the pirate boarding party. In the ensuing mêlée Blackbeard was killed, reportedly he had been shot five times and suffered twenty stab wounds.