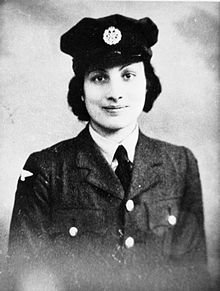 Anyone who asks what sort of narrative can British Muslims have should be told about the tens of thousands of them who fought for Britain in two world wars and at other times. There are other narratives as well, but this is the one I am concerned with in particular today as I was sent this link.

The Princess Royal has unveiled a sculpture of Noor Inayat Khan, a WWII agent dubbed the “Spy Princess” by her biographer Shrabani Basu, in London’s Gordon Square Gardens.

Raised in Britain and France and a descendant of Indian royalty, bilingual Noor Inayat Khan was recruited by the elite Special Operations Executive (SOE) in 1942 to work in Paris as a radio operator.

Records from the national archives show she was the first female wireless operator sent to Nazi-occupied France during World War II.

After evading capture for three months, the spy was imprisoned, tortured and eventually shot by the German Gestapo at Dachau concentration camp in 1944.

Her final word – uttered as the German firing squad raised their weapons – was simple. “Liberté”.

Liberty was a notion the pacificist-turned-war-heroine held deeply, according to Ms Basu.

It has been argued that love of liberty rather than love of Britain inspired her and that this love ran in her family.

Noor Inayat Khan’s great-great-great-grandfather was Tipu Sultan, an 18th century Muslim ruler of Mysore. He refused to submit to British rule and was killed in battle in 1799.

Born on 1 January 1914 in Russia to an Indian father and American mother, the agent’s infancy was spent in London.

The family moved to France when she was a child and lived in Paris, where she was educated and learnt fluent French.

The national archives describe how the sensitive young woman studied both medicine and music.

In 1939 the Twenty Jataka Tales, a collection of traditional Indian children’s stories she had retold, were published in Le Figaro.

When war broke out in 1939, Noor Inayat Khan trained as a nurse with the French Red Cross.

She fled the country just before the government surrendered to Germany in November 1940, escaping by boat to England with her mother and sister.

Subsequently, she joined the Women’s Auxiliary Air Force (WAAF) and was recruited into the SOE. The article implies that there may have been some problems between her and the higher echelons of the service and she may well have gone beyond her orders in her work. One would have to read the book to find out the details.

Many people came to Britain and joined the forces because of their love of their own country or just the desire to fight evil. That, too, is part of this country’s history as is Noor Inayat Khan’s heroic, tragic and inspiring story.