A Conservative MP writes about his Whig predecessor 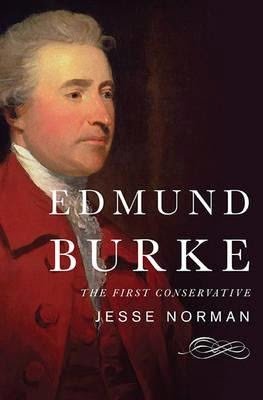 Jesse Norman‘s book on Edmund Burke was published last year but I have only just managed to read it and found it very interesting. Last year or this, the subject and the author are suitable topics for this blog and Edmund Burke – Philosopher, Politician, Prophet is a book that many readers of this blog would find of importance and interest.

Burke comes into that category of people about whom we all seem to know a little but few of us know much or with any accuracy. Most of the quotations attributed to him are bogus or misquotations. He did not exactly say that all it took for evil to triumph was for good men to do nothing or various words to that effect, which one can find on the internet. What he wrote in his seminal 1770 book Thoughts on the Cause of the Present Discontents was:

When bad men combine, the good must associate; else they will fall one by one, an unpitied sacrifice in a contemptible struggle.

That actually makes sense. To be fair, having silly but plausible quotes attributed is a problem Burke shares with, among others, Churchill and Lincoln. He also shares with them the fact that people tend to assign to them their own opinions and political affiliations. Thus, Churchill’s checkered party political career is little known or ignored by many and Lincoln is routinely assumed to have been a Democrat though he was a Republican.

With Burke the situation is even more complicated as he lived, wrote and was politically active long before the modern British political parties were formed. No reader of this blog needs to be told that Edmund Burke was not a Conservative as that party did not exist in his day nor a Tory as he was a Whig. A Rockinghamite Whig, to be precise, and as Mr Norman shows in his book, the main creator of a group that could be seen as the prototype of later political parties. The Rockinghamites were more than just a faction or a following that many eighteenth century aristocrats who bothered with politics had: though in opposition for many years they kept together and developed a core body of opinions on a number of subjects such as the need to come to an agreement with the North American colonies that they kept throughout their existence.

To many Burke may seem to have been a somewhat changeable thinker and politician. Why, people ask, did he support the Americans in their fight against the British Crown but was so vehement in his denunciation of the French Revolution from a very early stage? Burke denounced the French Revolution, the destruction of the French Monarchy and what he saw a sinking into mob rule as early as 1790 before the full horrors had developed. His Reflections on the Revolution in France (1790) and Letter to a Member of the National Assembly (1791) were accurate predictions of what was to follow. He proved to be much more capable of understanding events than many of his allies and opponents such as Charles James Fox, Thomas Paine or Mary Wollstonecraft. (Online Library of Liberty has a fascinating section in which one can read all the most important works in The Debate about the French Revolution.)

In fact, Burke’s thinking was mostly consistent and it is a rare historian who cannot see the basic difference between the ideas that motivated the American “rebels” and the French revolutionaries. Burke was simply ahead of most people. He could also see what the British government was doing wrong in Ireland and the problems with the East India Company – both being species of oppression and unaccountability. Many of these ideas have been discussed by previous biographers, particularly by Conor Cruise O’Brien in his magisterial work The Great Melody. (Curiously, Mr Norman does not mention an excellent short introduction to Burke, which has figured on this blog by Dennis O’Keeffe.

Jesse Norman divides his book into two, dealing with the great man’s life in the first half and his ideas as well as their possible influence on present day political thinking in the second. The life is detailed enough but is not in the O’Brien category and rightly so. The chapters present a good account of his life and his writings, including a discussion of the relatively recently discovered early essay on political parties. (While I have no complaints about the text, I have very serious reservations about the scrappy notes and references as well as the less than adequate index.)

Mr Norman is clearly an admirer of Burke but is, nevertheless, ready to be critical when he thinks it is necessary, for example when he talks of the latter’s behaviour during the Regency crisis. There is also a certain reticence over the impeachment of Warren Hastings, a controversial subject, though Burke’s attitude to His Majesty’s Indian subjects was clearly well ahead of his time and in keeping with his belief in freedom and dignity as the necessary portion of all.

The second part of the book is less happy in this reader’s opinion. Burke’s thoughts, writings and speeches had already been analyzed in the first half and there is little to add. Mr Norman concentrates on the question of how Burke’s ideas are to be used today, a laudable enterprise, but he goes further and falls into the error that previous authors, notably Jim McCue had fallen into, by discussing how Burke might or might not have reacted to certain modern political ideas. This is futile. We cannot tell how an eighteenth century thinker, brilliant though he was, would have reacted to ideas of the late twentieth or early twenty-first century.

Jim McCue in his Edmund Burke and Our Present Discontents introduced a long (perhaps the longest) chapter which ranted at feminism and proved beyond any doubt in the author’s mind that Burke would have hated feminism. Jesse Norman does not go that far but he does discuss a great many modern political, economic, social and anthropological ideas to prove that many things he does not like in our present state Burke would have disliked, too.

Mr Norman’s particular bugbears are modern economists none of whom, according to him, can see beyond simple wealth creation or money making and liberal individualism, which denies the need for social networks and institutions. To say that this is a simplification of modern economics and of the theory of liberal individualism is to understate the case. One cannot help being a little worried about a politician who asserts over and over again that social and political structures are more important than individualism and individual liberty, particularly if he simplifies what the latter two mean. Is there not a suspicion that his idea of what a satisfactory social and political structures would be gives a primary position to politicians as creators and guardians of those structures?

Despite the long and sometimes only tangentially relevant discussions of modern sociology and social anthropology together with the often conflicting findings, the book is worth reading, not least because we must all rejoice in the existence of a literate politician who has some interest beyond vote getting tactics.

Beyond that, there is no doubt that Edmund Burke and his thoughts are of significance today just as they were in the past. He laid down many fundamental ideas about politics, gradual change, the need for a coherent social structure and the notion that there is a seamless whole between past, present and future generations and these are still relevant though many of the details have changed. At a time when the Conservative Party and the right in general are searching for definitions we could all do much worse than study those provided by Edmund Burke two hundred odd years ago.