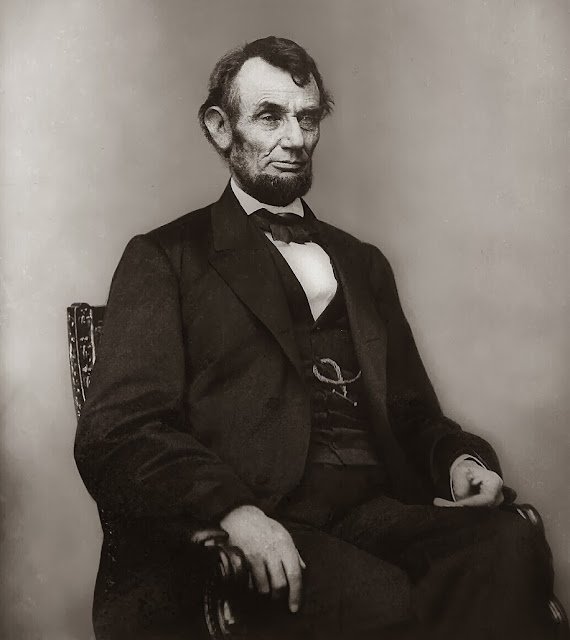 One cannot let this day pass without remembering the great event of November 19, 1863 when the Soldiers’ National Cemetery was dedicated at Gettysburg, Pennsylvania, four and a half months after the battle in which the Union army was victorious. The star turn was the Hon. Edward Everett, pastor, politician, former Harvard President, former Secretary of State and Massachussetts Senator, who gave, as was normal in those days, a two-hour speech, entitled The Battles of Gettysburg. It was full of oratoric flourishes and historic references to other wars. Nobody can even recall the name of the man without looking it up (guilty as charged). Then the President, Abraham Lincoln stood up and said a few words that have resonated through the succeeding century and a half: Four score and seven years ago our fathers brought forth on this continent a new nation, conceived in liberty, and dedicated to the proposition that all men are created equal. Now we are engaged in a great civil war, testing whether that nation, or any nation so conceived and so dedicated, can long endure. We are met on a great battlefield of that war. We have come to dedicate a portion of that field, as a final resting place for those who here gave their lives that this nation might live. It is altogether fitting and proper that we should do this. But, in a larger sense, we can not dedicate, we can not consecrate, we can not hallow this ground. The brave men, living and dead, who struggled here, have consecrated it, far above our poor power to add or detract. The world will little note, nor long remember what we say here, but it can never forget what they did here. It is for us the living, rather, to be dedicated here to the unfinished work which they who fought here have thus far so nobly advanced. It is rather for us to be here dedicated to the great task remaining before us—that from these honored dead we take increased devotion to that cause for which they gave the last full measure of devotion—that we here highly resolve that these dead shall not have died in vain—that this nation, under God, shall have a new birth of freedom—and that government of the people, by the people, for the people, shall not perish from the earth. There has been some discussion on whether those words “government of the people, by the people, for the people” were Lincoln’s own or was he quoting, again as was normal in those days of greater knowledge of the classics and religious writers, someone else, specifically John Wycliffe. It would appear that the General Prologue to Wycliffe’s Bible, the first to be translated fully into English, had the words: This Bible is for the Government of the People, by the People, and for the People. No reason why Lincoln or many of his audience should not know that, though few people nowadays would remember that Wycliffe is the name of a great scholar, religious teacher, precursor of the Reformation and the first translator of the Bible into vernacular English as well as that of a fictional detective. However, there is a problem with his authorship of those words. That they appeared in the Bible of 1384 was first mentioned and the words quoted by Clark Ezra Carr in 1906 in his book, Lincoln at Gettysburg : An Address. Colonel Carr, as Galesburg postmaster had represented Illionois on the committee that made the arrangements for the event and it was he who insisted that the President should be invited to the Dedication and asked to say a few words though Lincoln was known as not being much of an orator. One might, therefore, say that Colonel Carr knew whereof he spoke when he made the connection between the Gettysburg Address and John Wycliffe’s great translation. Indeed, the speech, short but carefully crafted, is “laced with religious language and meaning”. But did it quote Wycliffe? That seems a little more doubtful. It seems reasonable to assume that the General Prologue was written after Wycliffe’s death by John Purvey who completed and revised the translation. Indeed, it was probably written about ten years after Wycliffe’s death. He had died in 1384 and the Prologue was probably written some time in 1394 or 1395. Does it matter? The words Lincoln spoke have been more powerful and influential than almost any other in modern history; they were also an echo of a far older tradition which, unsurprisingly, was English, full of English history and English thought.